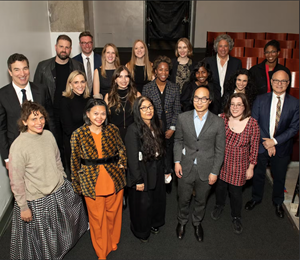 The American Academy in Rome (AAR) announced today the winners of the 2022–23 Rome Prize and Italian Fellowships. These highly competitive fellowships support advanced independent work and research in the arts and humanities.

The American Academy in Rome (AAR) announced today the winners of the 2022–23 Rome Prize and Italian Fellowships. These highly competitive fellowships support advanced independent work and research in the arts and humanities.
This year, the gift of “time and space to think and work” was awarded to thirty-eight American and four Italian artists and scholars. They will each receive a stipend, workspace, and room and board at the Academy’s eleven-acre campus on the Janiculum Hill in Rome, starting in September 2022.

The Rome Prize and Italian Fellowship winners will be presented in person during the annual Arthur and Janet C. Ross Rome Prize Ceremony. The event will also feature a Conversations/Conversazioni between the acclaimed composer and Bang on a Can cofounder David Lang (1991 Fellow, 2017 Resident) and AAR President Mark Robbins (1997 Fellow). In addition, one of Lang’s compositions—the Academy Award– nominated “Simple Song #3”—will be performed live. The Helen Frankenthaler Foundation is the 2021–22
sponsor of the Conversations/Conversazioni series.

“This year’s Rome Prize winners and Italian Fellows represents the diversity of the United States, and their projects build on the Academy’s commitment to the global impact of the arts and humanities,”said Mark Robbins, AAR President and CEO. “These fellowships are transformative, and we look forward to seeing the ways this experience is translated in the work to come.”
Rome Prize winners are selected annually by independent juries of distinguished artists and scholars through a national competition. The eleven disciplines supported by the Academy are: ancient studies, architecture, design, historic preservation and conservation, landscape architecture, literature, medieval studies, modern Italian studies, music composition, Renaissance and early modern studies, and visual arts.

The selected candidates were ratified by the Board of Trustees of the American Academy in Rome. Nationwide, the Rome Prize competition received 909 applications, representing 47 US states and territories and 19 different countries. Thirty-three Rome Prizes were awarded to 37 individuals (four prizes are collaborations), representing an acceptance rate of 3.6 percent. This group of Rome Prize winners is among the most diverse in the Academy’s history. Approximately 46 percent of the winners identify as
persons of color, representing a new high for this demographic. Twenty-four percent of the Rome Prize winners were born outside the United States. Ages of the incoming group range from 27 to 67, with an average age of 43.

In addition to the Rome Prize winners, the Academy announced the recipients of four Italian Fellowships, through which Italian artists and scholars live and work in the Academy community, pursuing their own
7 East 60th Street, New York NY 10022 aarome.org Via Angelo Masina 5, 00153 Roma Italia projects in a collaborative, interdisciplinary environment with their American counterparts. The Italian Fellows are also selected through a national jury process. A Terra Foundation Fellow was also selected.
A full list of the 2022–23 Rome Prize winners and Italian Fellows, as well as the international jurors who selected them, can be found here