Alex Katz’s ‘Self Portrait’ at Christie’s 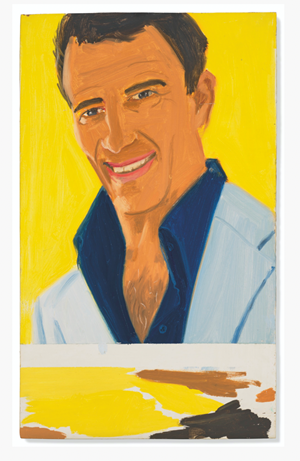 Ray Hughes Collection, Sydney (acquired from the above in the mid-1980s) and thence by descent.

Acquired from the above by the present owner.

Painted circa 1977, the present work is a vibrant self-portrait by Alex Katz. Depicting the smiling artist in a blue shirt and jacket before a sunny yellow backdrop, it served as a study for Katz’s large-scale Self-Portrait, 1978, which is held in the collection of the Virginia Museum of Fine Arts, Richmond. Emerging in the wake of Abstract Expressionism in postwar New York, Katz instead looked to the work of artists such as Paul Klee, Pierre Bonnard, and Henri Matisse as inspiration for his new figuration. Amid his depictions of friends and family, his oeuvre includes a number of self-portraits, all of which he conceived as symbolic images rather than objective likenesses. Indeed, he often presents himself in disguise; in Self-Portrait, he has playfully fashioned himself as Ricardo Montalbán, the Latino film and television star. Katz returned to this image in different mediums, examples of which are held in the permanent collections of the National Gallery of Art, Washington D.C., and Carnegie Museum of Art, Pittsburgh, among others.