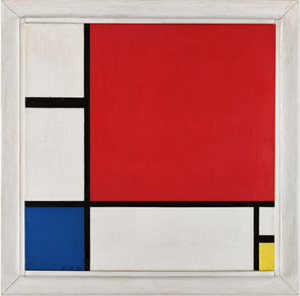 Piet Mondrian’s Composition No. II from 1930 anticipated to achieve in excess of $50 Million, the painting is among the most important & valuable works by the artist ever offered at auction.

In his recent review of Hans Janssen’s newly translated biography of the Dutch Modern master Piet Mondrian, The New Yorker art critic Peter Schjeldahl places the artist alongside only Picasso as the premier progenitors of twentieth-century painting: “Pablo Picasso and Piet Mondrian are, to me, the twin groundbreakers of twentieth-century European pictorial art: Picasso the greatest painter who modernized picture-making, and Mondrian the greatest modernizer who painted.” As one of the earliest and most innovative creators of truly abstract painting, Mondrian is not only among the cornerstone figures of Modern art, but also among the great Dutch masters, in company with Rembrandt and Van Gogh, who revolutionized painting and the course of art history in their time.

Possessing the balance and harmony that drove Mondrian to create the most daring compositions of the twentieth century, Composition No. II from 1930 represents the pinnacle of Mondrian’s mature style, which the artist refined during his time in Paris and immersion in the artistic firmament that took hold there during the 1920s and early 1930s. Works from this period are entirely distinct from Mondrian’s earlier movement toward abstraction before and during World War I, as well as from his later period Boogie Woogie works he produced after emigrating to America in 1940.

In Composition No. II, the artist’s signature grid abstraction and geometric composition is on full display; this work is further distinguished by the large red square form occupying the upper right quadrant. Works by Mondrian that have a predominance of the color red are exceptionally rare within his oeuvre, with only 17 paintings of the nearly 120 works executed by the artist from 1921 to 1933 having a focus on the color red, and of this group, only three paintings remain in private hands. Composition No. II comes from a discrete series of square-format canvases, the majority of which are held in museum collections. It is also one of only three of paintings to feature the dominant red square at upper right; the other two works with this feature are both in museum collections (the National Gallery of Belgrade and the Kunsthaus Zurich) and are smaller in size. Composition No. II has an exceptional exhibition and provenance history, and was first exhibited the year it was painted in the inaugural Cercle et Carrée exhibition in Paris.

Reflecting on his artistic evolution, his aims as an artist, and how a primary color such as red would come to feature so prominently in his work, Mondrian recounted how his “work unconsciously began to deviate more and more from the natural aspects of reality...The first thing to change in my painting was the color. I forsook natural color for pure color.”

Coming to auction for the first time in nearly 40 years on 14 November at Sotheby’s Modern Evening Auction, Composition No. II is anticipated to sell for in excess of $50 million, making this work one of the most significant and valuable works by the artist ever offered on the market. When the painting was sold at auction in 1983, it achieved the highest price ever paid at the time for a work by Mondrian and for a work of abstract art at auction, as reported in The New York Times.