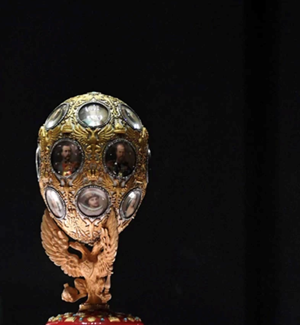 US law enforcement may have found a priceless Faberg egg on a Russian oligarch's superyacht. The find was made on the Amadea, a vessel owned by sanctioned Russian oligarch Suleiman Kerimov.

US law enforcement may have found a priceless Faberg egg on a Russian oligarch's superyacht. The find was made on the Amadea, a vessel owned by sanctioned Russian oligarch Suleiman Kerimov. Kerimov's yacht was seized in Fiji and sailed to San Diego in June.

US law enforcement has seized what they believe could be a priceless Faberg egg from the superyacht Amadea, the $300 million luxury vessel owned by sanctioned Russian oligarch Suleiman Kerimov.

Deputy Attorney General Lisa Monaco revealed the possible discovery of the jeweled egg at the Aspen Security Forum, per CNN. At the forum, Monaco said the jeweled egg, if authentic, could be one of the few undiscovered pieces in the world and potentially worth millions.

Faberg eggs are jewel-encrusted decorative pieces. From 1855 to 1916, approximately 50 Imperial Easter eggs were made for the Russian imperial family. The opulent works were commissioned by the Russian House of Romanov and were often sized between three and five inches, per CNN Style.

The ornamental eggs have been sold for millions of dollars but remain ultra-rare finds. They have also popped up in the most unlikely places like one that showed up at a US flea market in 2014 and was estimated to be worth around $33 million at the time.

The egg that US law enforcement may have found on Kerimov's yacht came into their possession after the oligarch's yacht was seized in Fiji. Kerimov's yacht estimated to be worth around $300 million was seized after the vessel made an epic journey from Mexico to Fiji. It spent 18 days traversing the Pacific Ocean before finally docking in Lautoka, Fiji, on April 13.