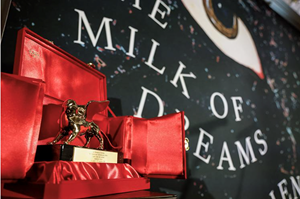 The prizes have been presented during the Awards Ceremony and Opening at Ca’ Giustinian, Venice

2 special mentions have been awarded to the following National Participations:

Golden Lion for the Best Participant in the International Exhibition The Milk of Dreams to:

Silver Lion for a Promising Young Participant in the International Exhibition The Milk of Dreams to:

The Jury has decided to award two special mentions to the following participants:

The awards of the International Jury have been presented with the following motivations:

Golden Lion for Best National Participation to Great Britain: Sonia Boyce proposes, consequently, another reading of histories through the sonic. In working collaboratively with other black women, she unpacks a plenitude of silenced stories. Boyce proposes a very contemporary language in relation to fragmented forms that the viewer in experiencing the pavilion can piece together. Important questions of rehearsal as opposed to the perfect attuned, as well as relations between voices in a form of choir, in a distance, and at varying points in the show are posed.

Special mentions as National Participations to:
France: in recognition of and gratitude for the long standing exchange of ideas and solidarity as the idea of of building communities in the diaspora. For looking at complex history of cinema beyond the west and the multiple histories of resistance in her work.

Uganda: in acknowledgement of their vision, ambition and commitment to art and working in their country. Acaye Kerunen in her choice of sculptural materials like bark-clothed rafia illustrates sustainability as a practice and not just a policy or concept.

Golden Lion for the Best Artist in the International Exhibition The Milk of Dreams to Simone Leigh: for the rigorously researched, virtuosically realized, and powerfully persuasive monumental sculptural opening to the Arsenale, which alongside Belkis Ayón, provided a compelling entrée to the ideas, sensibilities and approaches constellated and animated throughout The Milk of Dreams.

Silver Lion for a Promising Young Artist in the International Exhibition The Milk of Dreams to Ali Cherri: for an interdisciplinary and multilayered presentation that takes a meditation on earth, fire and water from a constructive perspective to a mythical dimension, reflecting The Milk of Dreams’s own opening up to other narratives that depart from the logic of progress and reason.

Two Special Mentions are awarded to the following artists of the International Exhibition The Milk of Dreams:
Shuvinai Ashoona reveals in her drawings and paintings a profundity of indigenous Inuk cosmogonies. An existence in which species are interdependent on each other, and which is not mediated by the coloniality of power of the human species. Acknowledging the violences of the colonial enterprise, Ashoona, in her work proposes possibilities of escaping the cul-de-sac by listening in, listening back and listening forward to indigenous knowledge.

Lynn Hershman Leeson: for indexing the cybernetic concerns that run through the exhibitions in an illuminating and powerful way that also includes visionary moments of her early practice that foresaw the influence of technology in our everyday lives.