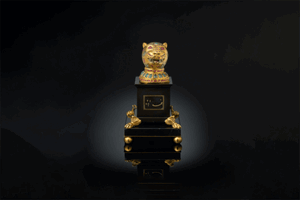 Valued at £1.5 million, a gold jewelled tiger head, which once adorned the gold-covered throne of Tipu Sultan in the 18th century, is at risk of leaving the country unless a UK buyer can be found.

Valued at £1.5 million, a gold jewelled tiger head, which once adorned the gold-covered throne of Tipu Sultan in the 18th century, is at risk of leaving the country unless a UK buyer can be found.

Tipu Sultan, the ‘Tiger of Mysore’, was regarded as the greatest threat to the British East India Company until his defeat and death in 1799. As ruler of Mysore, Tipu identified himself and his personal possessions with tiger imagery and this finial offers scholars the opportunity to illustrate the vibrant culture of Tipu’s court and closely examine British imperial history. Three surviving contemporary images of the throne are all in the UK.

The finial, made of gold and set with rubies, diamonds and emeralds, is a rare example of fully documented 18th century South Indian goldsmiths’ work and its existence was unknown until 2009. Its marble pedestal is unique among the five surviving finials known, and the meaning of its gold inscription is still a mystery.

This fascinating finial illustrates the story of Tipu Sultan’s reign and leads us to examine our imperial history.

I hope a UK-based buyer comes forward so that we can all continue to learn more about this important period in our shared history with India.

The Minister’s decision follows the advice of the Reviewing Committee on the Export of Works of Art and Objects of Cultural Interest (RCEWA). The Committee agreed that it is an important symbolic object in Anglo-Indian history in the last years of the 18th Century, with Tipu’s defeat having great historical importance to Britain’s imperial past and leading to a contemporary fascination with Tipu’s story and objects.

Tipu Sultan’s golden and bejewelled throne (c.1787-93) was broken up by the British army’s Prize Agents after Tipu’s defeat and death in defence of his capital, Seringapatam, in 1799. This tiger’s head is one of the original eight which were placed on the balustrade of the octagonal throne. Each gold tiger’s head from the railing is slightly differently set with gemstones, which makes this example both part of a set and unique in its design. Its quality attests to the expertise of Tipu’s goldsmiths and jewellers, in whose productions he took a close personal interest. The head of the large gold rock crystal tiger which supported the throne, and a bejewelled huma bird which perched on the pinnacle of its canopy, were presented to George III and Queen Charlotte (Royal Collection Trust). The tiger and its stripes were Tipu’s personal symbols. ‘Better to live one day as a tiger than 1,000 years as a sheep’ he famously declared. His flirtation with Napoleonic France led to his downfall at British hands. This tiger’s head, one of four throne finials to survive, including a head in the Clive Museum at Powis Castle (NT), should remain in the country together with the other fragments of the throne, and I hope that every effort will be made to achieve this.

The Committee made its recommendation on the grounds that the finial’s departure from the UK would be a misfortune because it is so closely connected with our history and national life and is of outstanding significance for the study of royal propaganda and 18th-century Anglo-Indian history.

The decision on the export licence application for the finial will be deferred until 11 February 2022. This may be extended until 11 June 2022 if a serious intention to raise funds to purchase it is made at the recommended price of £1.5 million.