10 Million Pounds Cézanne Painting at Risk of Leaving the UK 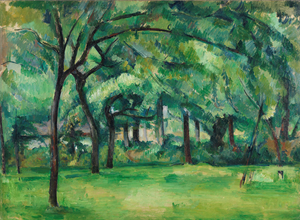 Paul Cézanne’s Ferme Normande, Été (Hattenville) 1882 is at risk of leaving the country unless a UK buyer comes forward to save the work for the nation. It was acquired by Samuel Courtauld in 1937 and once formed part of the most important collection of impressionist and post-impressionist art in the UK.

Paul Cézanne’s Ferme Normande, Été (Hattenville) 1882 is at risk of leaving the country unless a UK buyer comes forward to save the work for the nation. It was acquired by Samuel Courtauld in 1937 and once formed part of the most important collection of impressionist and post-impressionist art in the UK, The Samuel Courtauld Collection, which played a critical role in the reception of international modern art in the UK.

'Ferme Normande, Été (Hattenville)' is one of four depictions of a site in Normandy which was particularly important to Cézanne due to its acquisition by his first major patron Victor Chocquet. It is a small, simple and sublime landscape which is an early example of the artist’s so-called ‘constructed brushstroke’.

Arts Minister Lord Parkinson of Whitley Bay said: Paul Cézanne was one of the most important post-impressionist painters and influenced the likes of Matisse and Picasso. This stunning work marks an important moment in his career as his style and use of brushstroke developed in a new direction. I hope a UK buyer comes forward so it can be enjoyed by everyone for years to come.

The minister’s decision follows the advice of the Reviewing Committee on the Export of Works of Art and Objects of Cultural Interest. The committee agreed that it is a fascinating painting with an interesting historic connection to Samuel Courtauld’s collection. The painting is also significant in showing a transitional moment in Cézanne’s career, with a use of brushstroke and shifting light that display the artist’s developing style.

Committee Member Christopher Baker said: “Paul Cézanne’s (1839-1906) status as a bridge between the traditions of 19th-century painting and modernism is unrivalled. In his delightful ‘Farm in Normandy, Summer (Hattenville)’ the artist employed intense, free brushstrokes to evoke the dappled light, shadows and myriad green hues of trees and a meadow, anticipating later, key developments in his artistic evolution, when the abstract structures underpinning nature were gradually given greater prominence. The picture is also significant in the context of the artist’s career, as the farm depicted was acquired in the year Cézanne painted it by Victor Chocquet (1821-1891), his first important patron and a key champion of impressionism.

“In addition to these themes, it forms part of the very important story of British taste for international art in the 20th century. Cézanne’s landscape was purchased in 1937 by Samuel Courtauld (1876-1947), as the last of a remarkable group of twelve paintings by the artist Courtauld acquired: he played a seminal role in establishing an enthusiasm for impressionist and post-impressionist painting in Britain both through his own collecting and generous funding of major pictures secured for the National Gallery in the 1920s.

“Because of its beauty, significance in the artist’s career, and role in the wider appreciation of such artistic achievements, it would be a profound misfortune if this beguiling work could not be retained in this country.”

The committee made its recommendation on the grounds that the painting met all three of the Waverley criteria: being closely connected with our history and national life; of outstanding aesthetic importance; and of outstanding significance for the study of the development of Cézanne’s artistic style, as well as impressionist collections in the UK.

The decision on the export licence application for the paintings will be deferred for a period ending on Sunday 31 July inclusive. At the end of the first deferral period owners will have a consideration period of 15 Business Days to consider any offer(s) to purchase the painting at the recommended price of £10 million. The second deferral period will commence following the signing of an Option Agreement and will last for six months.

Offers from public bodies for less than the recommended price through the private treaty sale arrangements, where appropriate, may also be considered by the minister. Such purchases frequently offer substantial financial benefit to a public institution wishing to acquire the item.