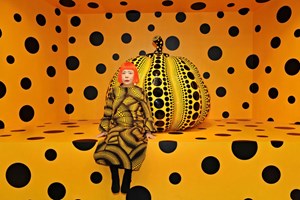 Yayoi Kusama is one of the most important artists of our time. From 19 March to 1 August 2021, the Gropius Bau will stage the first major retrospective of Kusama’s work in Germany, providing an overview of the key periods in her oeuvre, which spans more than 70 years, and highlighting the significance of her art in Europe – and Germany in particular.

Yayoi Kusama is one of the most important artists of our time. From 19 March to 1 August 2021, the Gropius Bau will stage the first major retrospective of Kusama’s work in Germany, providing an overview of the key periods in her oeuvre, which spans more than 70 years, and highlighting the significance of her art in Europe – and Germany in particular.

The exhibition space, which comprises nearly 3000 m², will include faithful reconstructions of the artist’s signature shows, a new Infinity Mirror Room, recent paintings and an installation in the Gropius Bau’s atrium, created especially for this presentation. An essential goal of this exhibition is to enable visitors to experience Kusama’s world and to trace the development of her work from her early paintings and Accumulation sculptures to her immersive spaces. The show is developed in close collaboration with Yayoi Kusama and her studio and will also address her artistic activities in Germany and Europe, a topic that has received little attention until now. 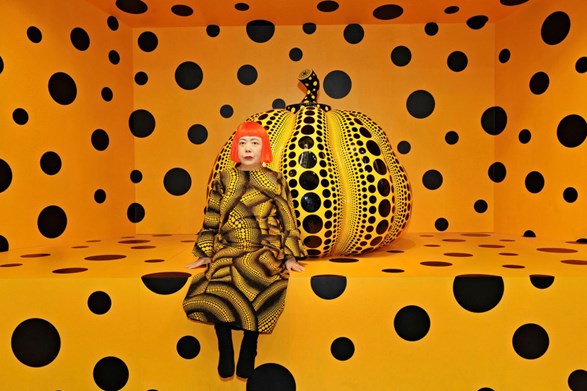 Central to this retrospective at the Gropius Bau will be the reconstructions of eight exhibitions from the years 1952 to 1983, illustrating how Kusama’s oeuvre evolved to include numerous media. Throughout her career Kusama has always engaged deeply with the act of curating and, as such, has devised ground-breaking formats that can be experienced in this chronological presentation. The retrospective begins with shows that were mounted in her hometown of Matsumoto, Yayoi Kusama Solo Exhibition and Yayoi Kusama Recent Works (1952), in which the immersive nature of her practice was already beginning to take shape. These are followed by Aggregation: One Thousand Boats Show, Kusama’s first environment in New York (1963), anticipating her preoccupation with the idea of self-obliteration and infinity, which remains a central premise of her work.

A key component of that presentation was a wooden rowing boat covered in white fabric forms, shaped like phalluses. This motif reappeared in the New York edition of the Driving Image Show (1964), grouped with other sculptural Accumulations, which consumed every corner of the gallery space. Floor Show – Phalli’s Field, a show mounted in New York (1965), comprised a mirrored room of approximately 25 m², containing polka-dot phallic forms of red and white fabric, arranged alongside further Accumulations. This was Kusama’s first Infinity Mirror Room. A well-known image of Kusama shows her posing in this room wearing a red bodysuit; by this time, her artistic persona and presence had become an integral part of every exhibition and performance. Floor Show already contained all of the key elements that distinguish Kusama’s oeuvre today: fabric phalluses, polka dots and mirrors, all used to create an immersive experience.

On the second stage of its journey in 1966, the Driving Image Show arrived in Essen, Germany. The white Accumulations were accompanied by objects covered with gold. Kusama spent a long time preparing for this exhibition, which established her artistic presence in Europe. That same year she also continued showing in New York, presenting her second Infinity Mirror room as part of the exhibition Kusama’s Peep Show or Endless Love Show. Presenting a hexagonal room, visitors could only look into the space through two peep holes. There were no objects inside; instead it evoked Kusama’s principle of obsessive infinity, purely by using lights that flashed in varying constellations. The last reconstruction at the Gropius Bau will offer a glimpse of Kusama’s later exhibition Encounter of Souls (1983), which was mounted at a venue in Tokyo – an endeavour by the artist to bring together key groups of works and different creative periods from her career up to that point.

Framing these reconstructed exhibitions at the Gropius Bau, a timeline will set out Kusama’s presence in Germany and Europe, which has been previously neglected. In 1960, she was already showing her work alongside artists such as Lucio Fontana, Otto Piene and Yves Klein as part of the large-scale group show Monochrome Malerei in Leverkusen, which she had actively championed. This became the foundation for her growing reputation in Europe, and in the ensuing years she had shows in Amsterdam, Bern, The Hague, Essen, Milan, Rotterdam, Stockholm, Turin and Venice. The research undertaken for the Gropius Bau retrospective lends a new perspective on the story of Kusama’s exhibitions and, as such, on the writing of her art historical legacy in Germany.

This timeline is accompanied by documentary photographs and films that illustrate the performative dimension of Kusama’s work, contextualising her oeuvre in detail. Simultaneously it highlights the revolutionary nature of her combination of fashion, art and performance, not least her Happenings, which were sometimes rooted in the socio-political movements of the 1960s and 1970s.

A key tenet of the exhibition focuses on Kusama’s ongoing self-enactment, blurring the boundaries between her body and surroundings, subject and object, inside and outside – a practice that was also reflected in the work of other artists who were active in the 1960s, when “life and art” began to converge. Kusama used her own body in her works as a placeholder, or in other words, as a proxy for the bodies of viewers. Such a gesture could be read as pre-empting today’s selfie culture – a will to be part of the action. Kusama’s own desire to merge with her works has always been associated with an obliteration of the self, an expansion into infinity, and remains so today.

“We are delighted that our retrospective of Yayoi Kusama will showcase the work of a visionary, radical artist. Not only did Kusama establish a singular status in the art world of the 1960s with her multi-disciplinary practice, her political statements also contributed to the feminist discourse of the time. Certain issues that have lost none of their relevance today, from the importance of empowering women to the intentional nature of self-styling, can be identified from very early on in her oeuvre. By reconstructing ground-breaking exhibitions, which Kusama designed herself down to the last detail, this presentation will reflect on the artist’s presence in Germany and trace the development of her art since the 1950s. One aim of the Berlin retrospective is to address her artistic persona and highlight the important role that she has played in an international network of artists, critics, curators and galleries.”
— Stephanie Rosenthal, Director of the Gropius Bau