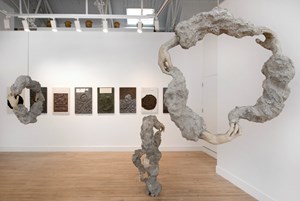 The Cooke Latham Gallery in Battersea, south London, opened last December as a new venue for emerging and mid-career artists. It is currently showing its second exhibition: Haptic Loop, by William Cobbing, a British sculptor and multi-media artist (including in video, installation art and performance) who trained in London and Amsterdam. ArtDependence spoke to the gallerists, business partners Clemency Cooke and Charlotte Latham, at the venue, and to the artist via email.

The Cooke Latham Gallery in Battersea, south London, opened last December as a new venue for emerging and mid-career artists. It is currently showing its second exhibition: Haptic Loop, by William Cobbing, a British sculptor and multi-media artist (including in video, installation art and performance) who trained in London and Amsterdam. ArtDependence spoke to the gallerists, business partners Clemency Cooke and Charlotte Latham, at the venue, and to the artist via email. 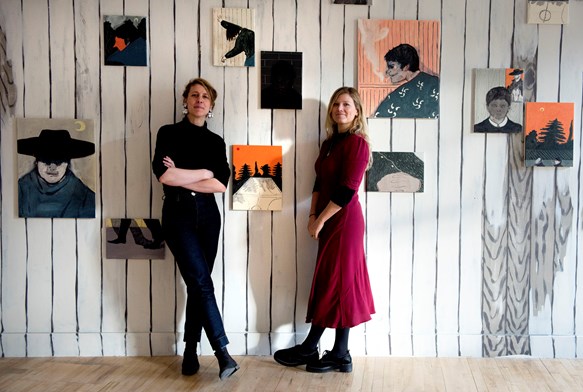 The Cooke Latham Gallery is located behind an unobtrusive steel door opposite the former headquarters of ‘J. &. B. Stevenson, Battersea Bakeries’, on a street just south of the Thames. Passing through the door, along a bare brick passageway and up a concrete staircase, you come to a large hall, which forms the top floor of the Battersea Bakeries’ old flour mill. Part of this large hall has been partitioned off by a white wall to form the gallery: a relatively modest space in the horizontal plane but with a high ceiling, in which the warehouse’s old rafters and joists are still visible.

Cobbing was given this idiosyncratic space and asked to come up with an installation. In response, he created Haptic Loop: a series of four sculptures, three larger ones in plaster and clay, and a smaller one in bronze. The largest is on the floor, while the other three are suspended from the ceiling by ropes. Reflecting their title, which refers to the sense of touch, each sculpture consists of a circle formed of alginate casts of the artist’s hands (each cast unique) linked together by lumps of partially moulded clay, which Cobbing has described in an interview was  ‘wonky misshapen mass[es]’. 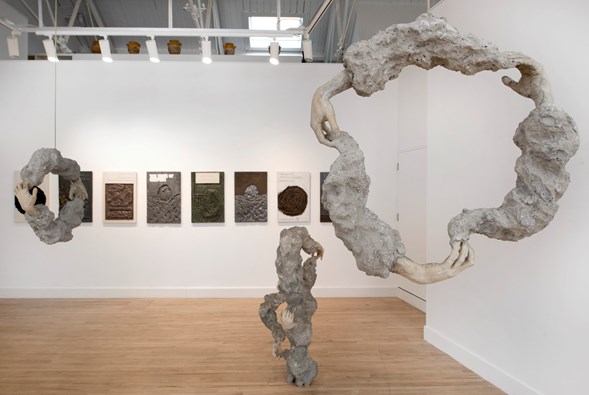 Each hand emerges at the wrist from one lump, and kneads another one at its finger tips, from the other end of which, in turn, the next hand emerges. The idea is that artistic creation – a favourite theme of today’s artists in every medium – is an incomplete process, perpetually alternating between order and disorder. Cobbing has compared these pieces to the ‘ouroboros’, the ancient Egyptian symbol of the snake that eats its own tail, which was used to represent infinity. The idea is an interesting one, although a work in lumpy clay may not be to everyone’s tastes – quite apart from the difficulty of hanging it from an average ceiling. 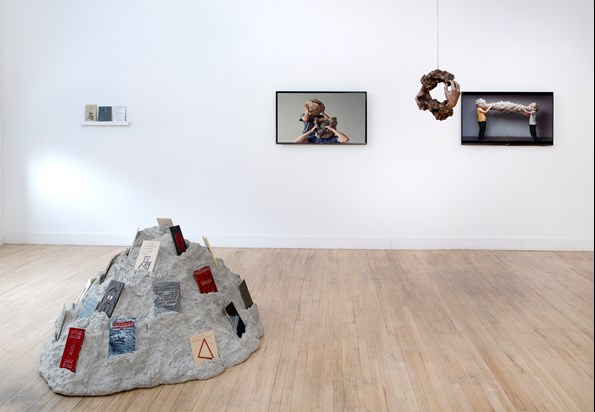 Also on display are three video installations. Each presents two people wearing a semi-formed lump of clay on their heads. In Anatomy Lesson (designed for the present exhibition), one person pours liquid clay from his own head onto the other’s. In Long Distance (2018), the two people try to mould a tube of clay connecting their heads, without being able to reach each other directly. In Text Based (2018), the two people take it in turns to write simple words (such as ‘YEAH’, ‘NOPE’, and ‘SIGH’) on the other’s clay-covered head with their fingers, and then to erase them. Cobbing  has said, in regard to Text-Based, that he often feels ‘swamped by the proliferation of digital text’ and has sometimes wanted to ‘shove a lump of clay’ onto his phone ‘just to bring it into a more tangible realm’. The idea is to slow down the act of writing to the point of the humorously absurd. He added a further layer of irony by using the intangible medium of hi-tech digital video to recapture the tangibility of low-tech, manually produced writing. Ingenious: but who would want to buy a video of people with clay on their heads?

When I ask Cooke this question, she admits that ‘there’s definitely a narrow market’, but speculates that some people are attracted by ‘that ephemeral quality’ in what is essentially a digital file with a screen thrown in. As with all conceptual art, she argues, ‘you’re buying into an idea rather than an object’. As with all conceptual art, though, this raises the question of why you would pay for the object. De gustibus non disputandum… 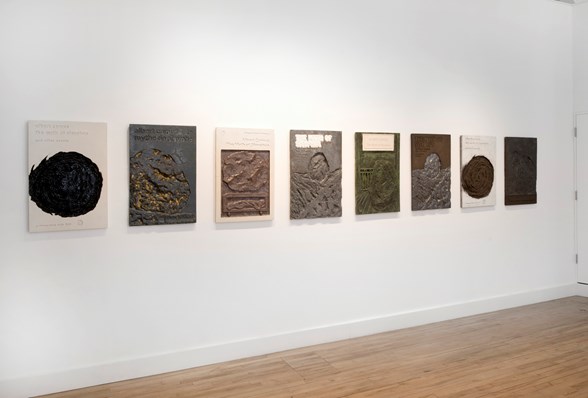 The most successful works on display are a series of monumental glazed ceramic slabs, each depicting a book cover of Albert Camus’ The Myth of Sisyphus, in a total of six different editions by different publishers (two designs are repeated twice, but with different textures and glazes). Each of the eight ‘covers’ is dominated by a different image of Sisyphus’ rock. Their evocative titles (Sestriere, Luz Ardiden, Mont Ventoux) refer, according to Cobbing, to different stages in the Tour de France in the French, Italian and Swiss mountains. He had in mind an analogy between Sisyphus’ punishment, in Greek myth, of endlessly pushing a boulder up a hill, only to see it roll back down again, and ‘the solitary struggle of cyclists on mountain stages’, as well as his solitary life as a sculptor, who is always, as he describes himself, ‘lugging materials up stairs’. Does this suggest that the vocation of the artist is a punishment, or just that artistic creation is endlessly repetitive and pointless? No answers are provided.

Because the slabs are so big (74cm tall and weighing 20kg), Cobbing, drawing on the expertise of a German colleague, used a specific mixture of fired and unfired clay called ‘grog’ to strengthen them and reduce the risk of damage during the firing. He carved the rocks on each cover separately; they come come out particularly well in ceramic, which captures their hard and gritty surfaces. 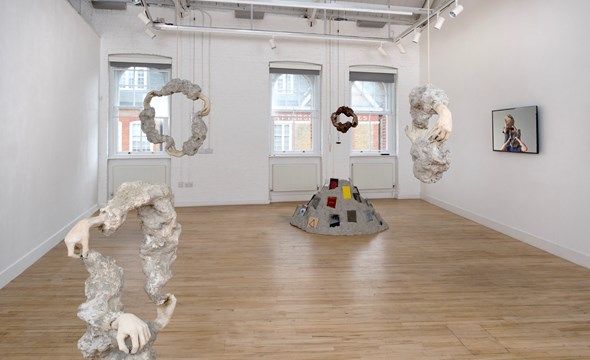 For aficionados whose sitting room walls might not comfortably hold such a large piece of clay, Cobbing has created a small series of slabs, entitled Cover Version, in a larger edition and at a more modest price. The slabs represent simplified and recoloured versions of more book covers; these, however, unlike the Sisyphuscovers, appear to be connected by nothing more than their personal significance to the artist. The titles range from the topical, such as How to waste Time on the Internet, by Kenneth Goldsmith, to the obscure, such as 100 Chairs in 100 Days and its 100 Ways, by Martino Gamper.

With their bright glazes, intriguing titles, and imaginative designs (albeit borrowed from Faber and others), these covers leave the visitor with the impression that, for all the sophisticated technology and conceptual explanations in the world, there is still no substitute for the simple pleasure of colours, shapes, textures – and books.

By Emma Park
Emma Park studied Classics at Oxford University, with a DPhil thesis on Plato and the Roman philosopher, Lucretius. She has since worked as a classics lecturer, school teacher, and pupil barrister. More recently, she undertook an Editorial Internship at the Spectator magazine. She has written reviews and articles for the Spectator and Apollo, the international art magazine, as well as other publications, including Maritime Risk International and the Oxonian Review. She is currently working as a freelance writer in London, where she also teaches writing at City Lit. Website: dremmapark.com, Twitter: @DrEmmaPark